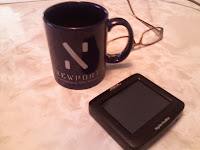 On the final day of Newport International Film Festival, I slept till 9 AM! Whew, I was getting worried. I fielded a phone call that confirmed a departure time, took a shower, programed the GPS for Logan Airport, rejoiced at the beautiful sunshine and got myself to Newport for the last act. The awards ceremony was in full swing, films were running, departures were underway and my passengers for the trip to Boston were ready to go. The ride to Logan airport was smooth, and I was back in Newport in 4.5 hours. L1 was not happy. I was. Said my good byes and when the last departure left the office, so did I. Ran into Jim Capobianco on my way out and had a lovely chat about is new short, Leonardo, family and film.

So who were my faves? Duncan Jones (Moon), Paola Mendoza (Entre Nos), Scott Teems (That Evening Sun), Alex Olch (The Windmill Movie), Dave Wruck (Haze), the NIFF staff, volunteers and all those folks who would walk into the box office, read the sign that said "transportation" and asked, "tickets?". It's been fun, thanks to NIFF for letting me sit a little closer to all the film and film makers I love!
Posted by Linda at 1:58 PM

Glad it all turned out well. Did you like '500 Days of Summer'? That might be the only romantic comedy I see all summer.

2D~ NIFF was fun this year. (500) Days of Summer sold out, I didn't get a chance to see it. Hopefully it will come to RI before the summer is over, limited release is next week. Most who saw it gave a positive review, even the men. A hopeful sign.