Thankfully I've had a lot of weekend commitments this summer, because Hollywood is doing little to entertain me this summer. This week's openings, Takers and The Last Exorcism hold little to no interest for me. Something that does interest me is the documentary The Big Uneasy from my pal Harry Shearer. It is playing all over on Monday, 8/30. Check your local listings. It's playing at the Showcase here in RI! In RI theaters worth a look? Inception, Scott Pilgrim vs the World, The Other Guys, Joan Rivers:A Piece of Work and Winter's Bone. Toy Story 3 is at the East Providence 10 go!go!go! Though it pains me to type this, Avatar is back in theaters. Cameron added 8 minutes to an already too long movie, and wants $15 more from you. In my opinion, more minutes can't make the movie suck any less. Goodness.
Posted by Linda at 2:34 AM 2 comments: 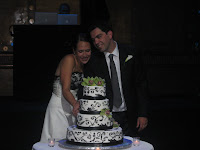 I've been away from this blog and the movies, to take on the role of motherofthebride once again. Liza & Ryan were married in New York City on Friday. It was was a sweet ceremony and a blow-out of a party. What a great time!! The happy couple is off on their honeymoon and I am working a slow recovery, as I spent most of the week in NYC visiting with friends and family. Going back to work is a bit traumatic, but there's more to life than parties *damn* Congratulations to the happy couple!

Scott Pilgrim vs the World

I fell in love with the film Scott Pilgrim vs the World when the first trailer was released a few months ago. When the trailer ended, I was giggling, clapping my hands, and I believe I said (out loud to no one), "that was awesome!!" (yes, I'm over 50, deal with it) After seeing the movie today, a few kids sitting in front of me said the same thing. Scott Pilgrim meets Ramona Flowers, and in a simple desire to pursue boy meets girl, he is dragged into the world of the League of the 7 Evil Exes. He holds his own, with a lot of kicking and punching. Scott must make decisions, Scott has a lot going on, Scott must grow. The characters are interesting, from his friends to his enemies. All surprising, all fantastic. This film is creative, funny, sarcastic and races along to a satisfying end. I loved this film, and give a big round of applause to the acting and the music, just fantastic!!
Posted by Linda at 9:04 AM 2 comments:

A glimmer of joy arrives in theaters this weekend. Scott Pilgrim vs the World looks like a lot of fun. The allure of Bardem, Franco and Crudup have me considering Eat Pray Love. Worth a look in RI theaters? Inception, Toy Story 3, Despicable Me, The Girl Who Played With Fire, The Other Guys, Joan Rivers : A Piece of Work and The Kids are All Right. Enjoy!
Posted by Linda at 1:35 AM No comments:

The Other Guys is a decent comedy. An odd twist on the buddy cop genre, with Will Ferrell doing a good job with a funny character. Film is a little too long, it would have been easy to cut about 20 minutes out of this film and it would have been just fine. I had a good time with this one.
Posted by Linda at 2:38 AM No comments:

Consumers and Couples in DVD

The only film released to DVD this week that I've seen is The Joneses. I really liked this one. In my rental queue? Date Night.
Posted by Linda at 7:06 AM No comments:

In Get Low a man isolates himself for 40 years and approaches a funeral director to bring him salvation for a past indiscretion. The story unfolds carefully, with brilliant performances. Tennessee in the 1930's is depicted nicely in costumes, cars and scenery. I liked this film.
Posted by Linda at 5:02 PM No comments:

A poignant tale with a grisly turn, makes for a compelling film in Winter's Bone. A 17 year old in the rural US is looking for her father, who has put their house up for bond and has disappeared. If she can't find him before his court date, they will loose the house. She, her younger brother and sister and incapable mother live in the house, counting on their resourcefulness and the kindness of friends and family. As Ree searches for her father, we are shown the fabric of his life, the underbelly of an ugly drug culture. There is a beautiful tone despite the desperate situation. Ree is determined, tough, realistic and loving. The ending, though startling, maintains that tone.
Posted by Linda at 5:00 PM 2 comments:

Getting bored with starting every Friday post bemoaning this summer movie season, but c'mon Hollywood. This week the best offering is the Other Guys. I'm kind of over Will Ferrell, but the reviews are pretty good. As much as I love Adam Shankman, I think I'm to old to appreciate Step Up 3D. I've read that the dancing is great. In RI theaters? Inception, Toy Story 3, Despicable Me, The Girl Who Played With Fire and The Kids are All Right. I may go back to West Newton to see Winter's Bone. Tough to find a film worth your $10 these days.
Posted by Linda at 6:12 PM No comments:

When my daughter was a kid, she was obsessed with dinosaurs. We did the balsa wood skeleton models and books about the prehistoric creatures. As she got older, her interest was fueled by reading Michael Crichton's Jurassic Park. This was her transition from Babysitters Club to novels. I was pretty psyched. When the movie came out, the kids saw it with their friends. I saw it in my early days of going to the movies by myself. I remember being scared to death during the chase scene in the kitchen with the raptors. Fantastic thriller, fantastic effects, cheesy acting, all good. I remember liking the movie, but I have not seen it in years. Tomorrow, the August Cort & Fatboy Midnight Movie is Jurassic Park at the Bagdad Theater. Cort & Fatboy have recorded a commentary with a bunch of my favorite Portland film folks to accompany the screening. Since I live 3000 miles from PDX, I have created a home version of this event. I have the tots, I have the beer, I have rented the disk, I have downloaded the commentary. Locked and loaded for a quality viewing of a classic monster thriller. Thank you Mr. Crichton. Thank you Mr. Spielberg. Thank you Cort & Fatboy.
Posted by Linda at 5:00 PM No comments:

Conflict and Conspiracy in DVD

Out in DVD this week is the action packed Kick-ass. Revenge fuels the action and violence, I enjoyed this one. Also out, The Ghost Writer is a good suspense drama.
Posted by Linda at 2:52 AM No comments:

Joan Rivers : A Piece of Work

I saw Joan Rivers perform live in a small summer concert venue, here in RI, back in the 80s. She was on the bill with Don Rickles. I was terrified to sit anywhere near the stage because of their acerbic styles, and notoriety for picking on members of the audience. Of course, Rivers targeted two members of the audience during her set, but when she was finished, she gave them both a gift. I was endeared. Since then, Rivers has had her ups and downs. Recently Ricki Stern and Anne Sundberg followed her for a year, for a documentary film. Joan Rivers : A Piece of Work is an honest portrayal of a life, a career and a philosophy that shows what is at the heart of Joan Rivers. Much of it told by herself. Her successes her failings, like the opening shot of a closeup of her face with no makeup, out there for the whole world to see. I loved it, thanks for a peek behind the curtain.
Posted by Linda at 1:30 PM No comments: