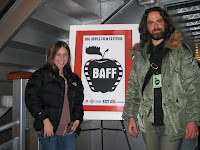 Heath and Marley Mensher, costars of He's My Dad.
On the final night of the 5th Annual Big Apple Film Festival, I had the pleasure of seeing Program 18. A collection of 6 short films, one of which was He's My Dad. Heath and Mark Mensher's thirty minute film about a serial killer who's been rehabilitated, and meets the daughter he fathered before he was institutionalized. A sweet film with a quirky tone. The production value is good. I had seen this film in DVD, and it looks great on a big screen. I especially like the song at the end. Congrats to Mark and Heath for being chosen for the festival. They had lots of friends and family there to support them. A fun night!
Posted by Linda at 3:59 AM